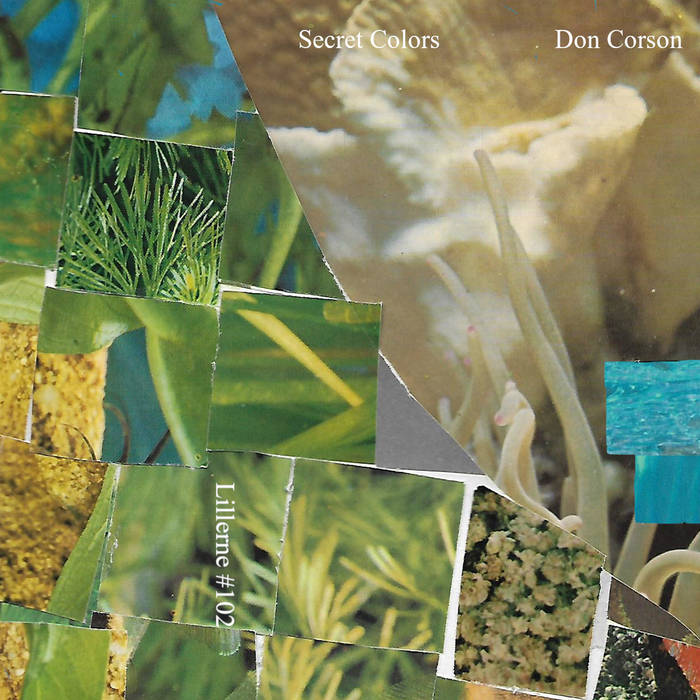 I am so stoked for this split! The A side is Matt Lawson's Secret Colors project (his second on Lillerne, the first being 2017’s Passing Through Again). Matt's music always brings with it a ton of depth and resounding power. Big swaths of deeply-layered ambient bliss. Thoughtfully and gently dynamic (though completely moving) compositions. And the B is Don Corson, a formerly ('til now) unreleased musician who has collected a nice chunk of his recordings for this cassette. He's been making music at home with a synthesizer and sequencer for some time, and this is his first release committed to tape (or any distributed format, really). Big vintage new age vibes and clean, dreamy melodies abound. Corson's music has a truly sincere feeling of wonderment and playfulness. Think Ray Lynch meets Woo meets Hiroshi Yoshimura's "Four Post Cards." Here's Don in his own words:

"I guess that my approach to making music has something to do with the nature, of how it makes me feel. I don’t go into any given song with a set idea or structure. I usually start with a sound (voice, texture )and see what it inspires in me. I have heard it said that there’s no original music any more, it’s all influenced by what came before. In a way, that seems like my style of writing. Wherever the sound leads me is where the piece goes."

"Matt and my oldest son Ben hung out in high school. I remember a day that Ben and a few of his friends showed up at the house to chill. I was watching the Pink Floyd video “The Making of the Dark Side of the Moon”. All the guys went straight down to my son’s room except for Matt. He sat down and watched the video with me. I later found out that Matt was making cool music of his own. Moving forward in time, I saw that Matt had been doing some recording and I contacted him to see if I could purchase some of his records. He kindly sent them with his regards. I felt as if I should do something in return, so knowing he’s into music on tape, I threw some of my songs on a cassette and sent it down to him. To my surprise, he felt that there was something of value on the tape so here we are today."

Bandcamp Daily  your guide to the world of Bandcamp

Cannibal Corpse's George "Corpsegrinder" Fisher stops by for an interview